I Fell in Love with the Princess of Death 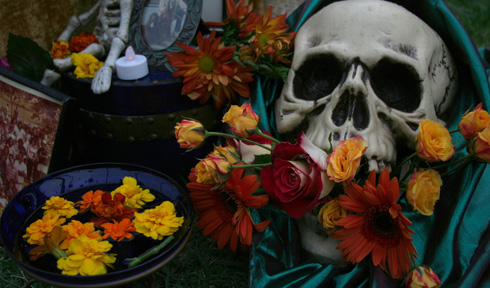 Grigoriy’s family keeps a skeleton sitting at the dinner table. “An old friend of ours,” Grigoriy said dryly. “We call him Erysichthon. Well go on, shake his hand. Reattach it when you’ve finished.”

Mrs. Grigoriy rolled her eyes. “Ignore my husband,” she said. “He is elaborate.”

“Erysichthon is a member of the family,” Grigoriy said, peering at her over the tops of his wire-framed glasses. “He is clean, honest, eats nothing, makes no messes, tells no lies, and reminds us every night” (Grigoriy raised one finger as if to emphasize his point) “of the true source of our bread. Besides, he smiles at my jokes.”

Here Grigoriy’s youngest son, who was playing with a dog under the table, said something in Russian that caused Grigoriy to roar, scoop him up, sling him over his shoulder, and spin him around the room.

“He said, ‘that doesn’t sound like a member of our family,'” Mrs. Grigoriy explained to me.

The driver Grigoriy sent had brought me through some pretty low-down industrial landscape (round vatlike buildings with pipes, distant loading bays, rusted towers like 19th-century locomotives that sprouted in the ground) and some drowsy yellow forests on the way to the dacha. Grigoriy came out to greet me wearing a moldy sweater and a pair of glasses on a chain around his neck.

I got introduced to his family. It was all pretty quick, so I’m basically guessing on some of the relationships. There were his two young sons who seemed to spend most of their time fighting each other in a cloud of action that moved slowly up and down the staircase. There was his wife, who teased him. A happy pregnant woman who was kind of always around seemed to be his daughter, and her husband was the guy who had a frown on his face at all times. There was another daughter, I gathered, but she wasn’t home—off somewhere with her boyfriend, who seemed to be in the position of being hated by everyone around the house. I picked this up during a card game and while kicking the ball around with the two boys in the afternoon.

After a while the dinner guests started piling up. Everybody got pretty dressed up at some point (the dacha had a cook, who I think was like a temporary caterer, but anyway, it was a cook-made dinner. There were guys with drinks on trays). I met some government officials and minor warlord types (visibly pickled, and sort of proudly conscious of their chins), but everybody blurred. There was drinking, to put it mildly. People had opinions on Chelsea. We were milling around before dinner, and I was holding forth to a circle of crooked Forbes billionaires and lesser heirs of Tolstoy, if you can picture that. Then Grigoriy’s younger daughter came in. And I stopped.

It was the girl from Red Square, the one in the fur-trimmed jacket. Natasha. That was her name.

She went right up to Grigoriy and started firing out a stream of hostile Russian words, and he looked instantly angry and came back with a pretty rough lecture. I don’t know if you’ve ever seen two people have a heated discussion in Russian, but it’s kind of like watching great Neolithic cave-painters settle a dispute by painting, just angrily covering the walls with one mammoth after another until the torches go out or one of them gives in. Finally, Natasha stormed off. I don’t think anyone was paying attention except me. She went out onto the back porch, and this time, who knows why, I followed her.

It was a cool night, blue after sunset. The sound of crickets, etc. She was leaning against a post with her back to the house, looking out at the dark line of trees. Not exactly crying, but obviously upset. It was just the two of us out there. I stood next to her for a second.

“So give me a fucking cigarette,” she said when she noticed me. Her accent was stronger than Grigoriy’s.

“We’re not even Russian,” she said while she kind of quickly and angrily smoked my last cigarette. “We’re Ukrainian. It’s disgraceful. These people! My father wants to be a great liberal cynic, but he can’t resist dinner with the communists. Not all communists, of course. The ones who can afford to be communists.” She said something in Russian and sort of partially spat. (You can do that in Russian without departing from the basic rules of grammar.)

“You think he should make new friends?” I asked.

“I think Diogenes didn’t use a cash register,” she said bitterly.

I mean, what are you going to do when a girl says something like that? Am I supposed to be made out of stone? I basically had one choice, and I took it. I fell in love with her there on the spot.

Fuck it, nobody wants to see this blog get turned into my woes of the heart in Moscow. But yeah, we got along. I came up with enough just-barely-amusing things to say to distract her a little from whatever had just happened with her dad, and we found out that we had exactly the same feelings about, I don’t know, climate change and Joe Strummer. Yes, I know how that looks, but factor in the moment, the alcohol, the breeze, the culture/language barrier, brain chemistry, and the general weirdness of the situation, and it seemed to mean something, maybe more than you’d think.

“Exactly!” she said. “That’s exactly it. The truth is only known by guttersnipes!” She was laughing at the ridiculousness of the statement, but she meant it, too. It turned out that she had very romantic views about “the people” and felt desperate to escape from the civilized luxury she lived in. I’m not that civilized, I wanted to say. But I didn’t.

We’d sort of walked around to the side of the house, where there was a copse of trees with a big open area in the middle (the kids and I used it for a pitch a few hours earlier). I was pretty sure we were missing dinner, but she didn’t seem to care and I didn’t want to go inside. I don’t know where it was going, but I know how it stopped: suddenly this huge black dog crashed out of the trees on the other side of the clearing and came silently bounding right toward us.

I must still be shaken up from the bite I took in Соко́льники, because I jumped about a yard in the air. Of course, the dog (it was some variety of wolfhound) just ran up to her and started licking her face while she cooed at it and patted its ears. A minute later she said her boyfriend was picking her up and she had to go. I stood there. She went.

I followed her around to the driveway and watched a guy in a leather jacket come to a stop on his motorcycle. She got on the back and put her arms around him. Her sister, the pregnant woman, told me later that the guy works on the science side of some crime ring, helping chemicals turn into drugs.

I spent the night in a guest room. Natasha didn’t come back.

Grigoriy didn’t say anything about my no-show at dinner. He acted sort of exaggeratedly high-spirited and fond of me in a way that seemed to broadcast aggression, though; I don’t think either of us was too sure how to read the new situation. I went through the dining room looking for a snack in the middle of the night, and he was sitting at the table alone, drinking champagne and telling jokes to the skeleton, Erysichthon.

I Fell in Love with the Princess of Death