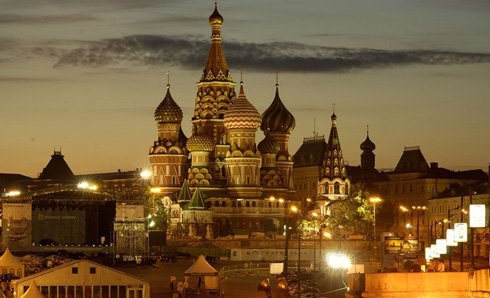 I figured out what I wanted to say about walking in Red Square. It’s like going to see The Nutcracker, only the KGB may or may not be sleeping with your wife. That’s what it’s like.

Went out for a long walk tonight—still about nine feet high on luxury and whatever drug Grigoriy gave me, knowing the inevitable guilt backlash was on its way (how can I stay in a palace when John Stewart can’t even improve fuel economy standards), wanting to ride out the vapors as gently as I could—and by perfect chance I wound up meeting the most beautiful woman I’ve ever seen in my life. She was standing under a street light by St. Basil’s, and it wasn’t even cold out, but she had on this long black jacket with fur cuffs. Blond hair like a metaphor. I was starstruck.

I don’t know, sometimes my mind runs like spray off a car in the rain. Thousands of sentences shearing off everywhere, no hope of clarity or sequence.

She set off walking somewhere, and I followed for a few minutes, not creepily, but just from appropriate dreaminess. She ducked into a movie theater (Otto Preminger’s Laura, whatever that is) and I almost followed her but didn’t. Why do we do anything, I don’t know.

Saw my first Manchester United fan on the way back—he was seven years old, speaking an unknowable language (Turkish?), and trailing along behind parents who seemed to exist as the lower motor functions of sentient digital cameras. His jersey identified him as Cristiano Ronaldo. Don’t think he’s in town for the game.