If it’s true that the tents are about to be packed, the cages broken down, the sawdust swept, the clowns sedated, the daredevils shot, the lions zipped into their traveling sweaters; if it’s true that the circus is about to skip town, on a cloud of greasepaint and diesel fumes, leaving behind only crushed flowerbeds, the odd peanut shell, and three secret broken hearts, then as the final performance begins, it’s only fitting that we take a last look at the ringmaster. 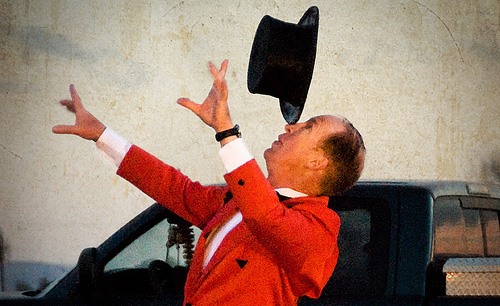 Who is he, the squat, dapper, beetle-browed man in the waistcoat and swallowtails, beneath the teetering stovepipe hat? How does he manage this strange combination of mastery and powerlessness, so that the show seems at once tightly in his control and on the verge of slipping out of his hands? Is it a practiced effect, an attainment of his theatrical person, or is the thrill it induces only amateur and incidental, and perhaps legitimately dangerous?

Ladies and gentlemen and children of all ages…allow me to introduce (he drones in his murmurous accent, phlegmatic but definite, like the Nixon administration) direct from the Southernmost Sea, the Fabulous Fire-Breathing Fontellinis and their Trio of Musical Bears. Ah, I see one of the bears has got loose in the crowd (nearly mumbling, like an accountant reading the tax table) and begun to eat the spectators. Don’t be alarmed, ladies and gentleman, he’ll go to sleep as soon as he’s full. Ladies and gentlemen, prepare to be amazed by the Pie-Flinging Calamity, Miss Darwina Butterknot. 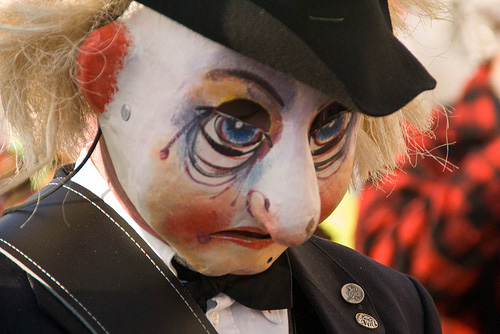 With his bullfrog head hanging low and in front of him, less like Richard Nixon than like a man in a Richard Nixon mask, he flourishes his victorious handkerchief, and lists away, oddly tipping, like a ship being cannonaded. No one could be more dour, or more trivial; more plaintive, or more grim. With his glittering epaulets, his watch chain, and his throat-blossoming airy self-conceptions, you can imagine him as a kind of Napoleonic impediment, of the implacable admiralty in some irrelevant council of war; or as a chalky Pluto, disturbed and subterranean on the cloudy heights of Olympus, fingering his figs, looking downward.

The big top is full every night. The tigers get loose among the acrobats, and swallow the flying trapeze.

After the performance, late at night, when the strongman has gone to sleep, the ringmaster creeps out of his room and slips among the cages. Is he making for the clowns’ trailer? Will he sit before their mirror, dull as a toadstool, and cover his face with sad paint? So he will. He will rise from his chair, a spectral mime, and dance, alone, to a waltz from a tiny music box. Dust will shimmer in the moonlight. He will look as resolute as failure, and as hopeless as success.