Robbie Savage’s hair and Robbie Savage have been around football for such a long time that it’s easy to take them for granted. Together they’ve played 154 games for Crewe Alexandra, 374 for Leicester City, 164 for Birmingham, and countless more for Blackburn and Derby—and the amazing thing is that they’ve always played for the same team. They’ve become almost synonymous with each other, to the point that it’s hard for most football fans even to imagine them apart. They’re like a meaner Laurel and Hardy, or maybe more to the point, like a much nastier Han Solo and his blonder and slightly more taciturn Chewbacca.

Then again, when you consider how perfectly their skills complement one another, maybe it’s not so surprising that they’ve formed such a durable partnership. Robbie Savage, the tenacious, irritating, hard-footed, strenuous midfielder who’s collected more yellow cards than any other player in the history of the Premier League, and Robbie Savage’s hair, the flowing, natural, inspired and sinuous striker with some of the most beautiful goals in the last ten years to his credit…they complete each other, in a way; they feed off each other, and it’s highly questionable whether either player alone could have had the career they’ve had together. 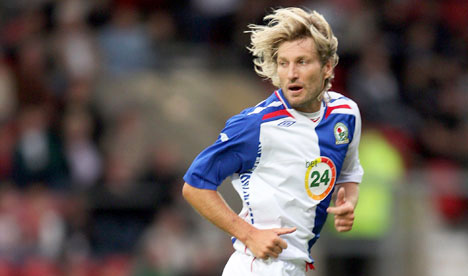 Just watch any highlight clip from their years at Leicester or Birmingham, and you’ll see what a perfect duo they make. You’ll see Robbie Savage dogging the steps of whomever he’s defending, scraping and bumping and rattling his opponents until they either give up the ball or lose their taste for the competition; then, having bruised his way into possession, he’ll knock the ball forward to Robbie Savage’s hair, who’ll start on a rich and lustrous run, hypnotizing the defense with his full body and healthy sheen, slipping the ball into the net while the keeper looks on, dazzled. Between the two of them, they’re like Thor, the Norse god of thunder, and Thor’s hair, the golden Pantene man-coif your pool boy can only dream of.

As with any great dichotomy, there are spiritual dimensions to this. Robbie Savage plays the game with a down-and-dirty grit that conjures images of Stonehenge, stag horns, human sacrifice, pagan animism, tribes in forests: he must be part elk, or at any rate he seems to have been born with an instinct to charge with his head down at anyone who challenges him. He’s the earthy, pagan, deeply annoying mystery of human mortality. Robbie Savage’s hair, on the other hand, plays with the radiant weightlessness of pure angelic being: fanning out like sunbeams, wafting like the soul. 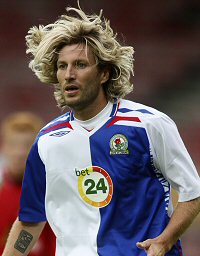 You may think I’m exaggerating, or that I’m just being facetious. You may write to me and say, “Sure, Robbie Savage’s hair and Robbie Savage have had an interesting career together, but they’re just a couple of football players. Come on, man! Come on!” Well, I’d love to answer you, but I can’t. Thinking about Robbie Savage has given me a migraine, and I’m going to go punch a hole in a wall and play harp music till I fall asleep.