Q.P.R. Throw Down with the “King of Ghana” 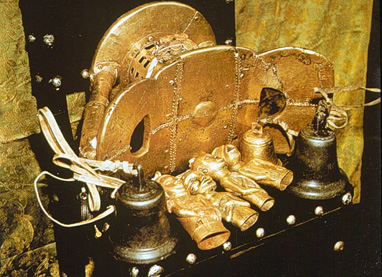 His Majesty Otumfuo Nana Osei Tutu II, the 16th Asantehene, King of the Ashanti, ascendent of the Golden Stool, has been ejected from the toilets at Loftus Road after Q.P.R. stewards caught him smoking.

At least, I think he has. The BBC and the News of the World both report that this happened to “the King of Ghana,” whom the Blackpool Gazette also places at Q.P.R.’s recent 3-2 win over Blackpool. But since (a) there is no such person as the King of Ghana, Ghana being a constitutional republic, (b) Otumfuo Osei Tutu II is, though he holds no political power, the ceremonial leader of a major Ghanaian ethnic group, (c) is a football fan, and (d) was educated at the Polytechnic of North London, I can only assume that he is the majesty they mean.

In any case, in his BBC column today, Ian Holloway is thrilled to see Q.P.R. cast a cold eye on the nicotine cravings of African royalty:

It just goes to show QPR don’t mess about – ‘Sorry mate, I don’t care if you’re the king of Azerbaijan, you’re still not allowed to smoke in QPR’s toilets!’ Fantastic.

As in all other things, I agree with Ian Holloway in this. Are you the king of Azerbaijan? I genuinely don’t care. Is there a sign showing a red circle with a slash through it over a crude depiction of a cigarette? Is there? Is there, Your Majesty?? 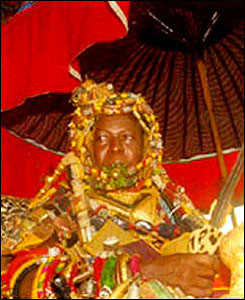 The Asantehene takes power when he is raised and lowered over the legendary Golden Stool, the royal throne which the High Priest Okomfo Anokye caused to descend from the heavens onto the lap of the first Ashanti king in the late seventeenth century. The stool is believed to contain the soul of the Ashanti nation, unborn, living, and dead. The current king is also pleased to have an honorary doctorate from London Metropolitan University.

He is the owner or “life patron” of Asante Kotoko, one of Africa’s most successful domestic football clubs, where the administrators say things like: “Kotoko has an owner in His Majesty Otumfuo Osei Tutu II, who in his wisdom knows what he wants for the club. It therefore amounts to the highest point of insubordination for any one to think of even trying to think of a sort of telling the King how to run his club.” Kotoko play in the Kumasi Sports Stadium in southern Ghana, where Otumfuo is presumably allowed to smoke wherever and whatever he wants.

Q.P.R. Throw Down with the “King of Ghana”