Capello, the Mafia, and England 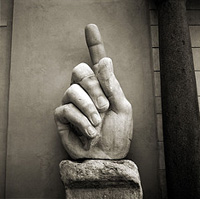 This week’s Run of Play at Pitch Invasion feature looks at the way Fabio Capello has been portrayed by fans and the media in England, and wonders about a style of characterization that relentlessly depicts him as a mob boss or a bloodthirsty dictator—but in a good way:

There’s a fascinating process at work here, because what seems to be happening is that Capello’s foreignness—which was initially a subject of anxiety for a large segment of England supporters—is being run through a particular popular-culture filter that recasts it as an expression of English strength. It isn’t the real Julius Caesar, after all, to whom Capello is being compared, or the real mafia don. It’s the movie version of each, the figure through whom we’re able to indulge power fantasies and a dream of dominance without real-life moral consequences. None of these figures is foreign, really. Collectively they represent a kind of mythic caricature, rooted tightly in our own cultures, of the strong leader, the boss, the man no one dares to talk back to, the man who doesn’t care how you feel.

Read the full post here, and acquaint yourself with Pitch Invasion while you’re at it.

Capello, the Mafia, and England