The trouble with Peter Crouch isn’t how to describe him, it’s how not to describe him, how to stop describing him. You could go on forever. He plays like two paperclips locked in a fight to the death. He has the shoulders of a kangaroo and the head of a quarter-teaspoon. He got his cheekbones and chin from a video-game elf and his limbs from a dancing pipe-cleaner. No one with that sort of lordly quiver in his mouth ought to excel at football (he has that Spencer prince look, doesn’t he, like Diana sold her tall child to the circus?) but Peter Crouch is good—not breathtakingly good, not a great for the ages, but solidly world-class in his gangly jutting angles-and-elbows way. 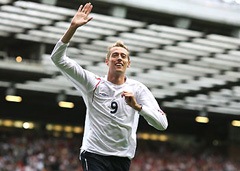 This is what I love about Peter Crouch: he plays like nobody else. Nothing he does is like anything you’ve seen before; he’s like a book full of all-new adjectives. That’s why the descriptions keep coming, because you can’t make sense of him in any other way. A 6’7″ striker who plays with agility rather than strength, a rail-thin leaper with no heading ability but sensational ball-control skills…when have we ever seen a player like this before? When will we see one again? Crouch is so glaring on the pitch, so flagrantly different from any other player, that I think half the abuse he takes from fans is simply a prissy “How dare he!” He looks so weak, so bullyable, like a good clattering would break his jaw to pieces; and he lopes around for half an hour like a casual wolf; then suddenly those skinny girl’s legs start to flurry, and before you can blink he’s taken to the air in the shape of a cartoon swastika and knocked the ball to the back of the net. He plays a modest game compared to someone like Cristiano Ronaldo, but for sheer going against appearances it’s the most audacious game in football.

Duke Ellington had a famous line—I think he was describing John Coltrane—about preferring a musician who was a “number-one himself” rather than a “number-two somebody else.” Peter Crouch isn’t the best player in the world, and he may be less like a jazz musician than any other living human being, but he is absolutely a number-one himself. It may sound like a strange thing to say about someone who looks like a starved broomstick, but Peter Crouch has style. 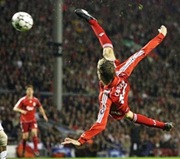 That stretched boy, Peter Crouch; that bare birch rod; that pale eel in a tunnel of right angles, whereof the walls are invisible; that beast made of fiddle-bows; that offspring of a rapier and a cushion; that goose’s neck; that stripped pencil; that kite-string!

Say not, this man is tall, for who can see

How tall or short he is above his knee?

His body was curiously elongated, as if, some time ago, his top half and his bottom half had developed a disliking for one another, and agreed to grow in opposite directions; from which precincts they looked on each other with suspicion, and communicated only by mail.

He was tall and narrow and caved in upon himself at the edges as though the god who had made him feared weight. In the afternoon he ran out upon the grass and the other men ran near him but his running was not theirs. It was a different running though in their bright child’s liveries they might from a long way off have looked the same. His hips collapsed inward and collapsed upon his slicing shins and the noiseless driving of his arms drove the collapse further and further in although somehow he did not fall, did not fall but kept running, ran harder and harder upon the bright green jewellike grass as though the demon in him drove him to run as though he ran with the others although running with the others could not make his running theirs.