A Line Under Sunday, December 2 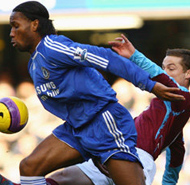 Chelsea 1 – 0 West Ham — Had you told me, when I was fifteen, that I would one day wake up to a headline reading “Police Investigating Drogba Laser Incident,” I would have eagerly looked forward to a war with a race of insectlike alien predators. I would not have imagined a soccer game and a pen light. It just wouldn’t have crossed my mind.

Tottenham 2 – 3 Birmingham — I used to get a chuckle out of the joke that it was appropriate that Tottenham’s manager was named “Juande”, because that was when they would be good again. Now it just seems cruelly optimistic.

Liverpool 4 – 0 Bolton — I have had more trouble putting quarters in a washing machine than Liverpool have had scoring recently. After Babel tapped in the fourth, I honestly expected Bolton to start rumbling and filling up with water.

Aston Villa 1 – 2 Arsenal — I think the most impressive thing about this Arsenal team is how casual they always look. There’s a real Sunday-in-the-park feeling about the way they reach into your body with their bare hands and tear out your quivering soul.

Portsmouth 0 – 0 Everton — I would have expected Portsmouth to rally around their troubled manager and produce a more inspired display. Then again, being arrested in a fraud investigation doesn’t make you Henry V.

Reading 1 – 1 Middlesbrough — If the thought of drawing with Reading makes you break out in shivers of a relief so sweet it’s like enchanted liquor winding through your body, then Gareth Southgate, when did you start reading my blog?

Sunderland 1 – 0 Derby — Okay, look. We’re all thinking it. I don’t know why everyone’s been so shy about actually saying it out loud. I just…I need to get it out there. Derby are…not that good. There, okay? I said it.

Wigan 1 – 1 Manchester City — I spent some time this weekend constructing a theory about how the transformation Steve Bruce was working at Wigan was like the Kierkegaardian transition from the aesthetic to the ethical state of existence. I explained this at length to my wife, who sort of frowned and bit her lip. “What?” I cried. “Did you think I was sloppy with the Kierkegaard?” “Well, no,” she said slowly. “The Kierkegaard was fine. But Brian, it’s just Steve Bruce.”

Read More: A Line Under Sunday

A Line Under Sunday, December 2