UEFA v. The G-14: The Short History of a Pointless Disagreement 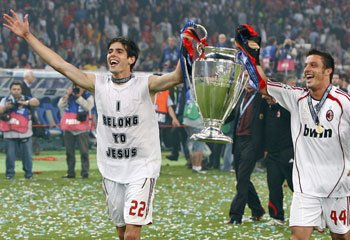 Somewhere in the far-off background static of football news this week, behind Champions League results and concern that Pele’s ego has finally eaten his brain, you might have caught the dim suggestion of an idea that the very fabric of European football is about to be ripped apart. The details are probably swimming at the bottom of Monday’s second pint glass (I’m not saying you’re a drunk, but I am saying you’re a terrible driver) but you might remember something about UEFA pledging to reserve a Champions League semifinal slot for Nuneaton Borough, and the G-14 responding by vowing to break away from UEFA completely and form their own competing super-league in which no big club will ever sully themselves by playing an actual match and the title will be awarded by weighing huge piles of money. But surely, you say, there’s more to the story, and Shelly, I say, you’re right. For the benefit of the just really sleepy among you, then, I’ve compiled a Beginner’s Guide to the Great European Football Standoff of Twenty Aught-Seven, the year when football could either be all about the money, or be all about the money, but in a slightly different way.

WHO IS HE? The great French midfielder and three-time European Player of the Year, who, when his glorious football career ended, entered the no less glorious arena of football bureaucracy, rising at last to become duly elected President of UEFA, morning star to briefcase handlers from the Azores to Cape Zhelaniya.

WHAT’S HIS STORY? Platini is new to the UEFA presidency, having taken over from a sentient magma deposit named Lennart Johansson only this past January. His predecessor held the office for nearly two decades on the back of a strict program of grandfather-lookingness and fluctuating opinions on the length of women’s shorts. Thanks in part to Platini’s friendship with FIFA President Sepp Blatter, a close relationship that first began to thrive when Blatter noticed how well his hands fit into the strings on Platini’s back, Michel swept into office as a reform candidate, promising a healthy diet of Blatterism: support for smaller clubs and smaller nations, restrictions on foreigners in domestic leagues, etc. In short, anything that might conceivably frustrate Arsenal.

Will helping clubs from smaller football nations to a steaming slice of Champions League revenue hurt Platini’s chance of winning the votes of those (numerous) nations when the time comes for him to stand for re-election? Why, no, sir, it will not.

WHAT IS IT? A prototype assassin-class droid with a high-grade flamethrower attached to its retractor claw, the G-14 first drew attention with its spectacular incineration of… No, the G-14 is the official cabal of the most prominent clubs in Europe, which represents the interests of the weak-orphan Real Madrids of the world against the many powerful bullies arrayed against them. The G-14 currently has 18 members, and is thinking of expanding this number by around 40, at which point it will change its name to the G-12.

WHAT’S ITS STORY? Is money a story? The G-14 think European football should reflect the priorities of the clubs who can afford to buy priorities at dealer prices. They resent the Platini-Blatterist insinuation that the so-called “champions” of smaller football nations are more deserving of slots in the Champions League than the so-called “fourth-place finishers” from the power leagues of England and Spain. They disapprove of Platini’s inane coddling of these tiny, mosquitolike nuisance-clubs whose only proper role in the Champions League is to curl up and play Poland while the G-14’s tank units plow through to the knockout phase. Sure, we’re rich, they say, but we and we alone can guarantee top-level football, and, as the lightning shreds the night sky and the wind whips their warlock cloaks around them, they draw themselves up to their full Luciferian height on the craggy precipice. “It’s time,” they say, clenching one mailed fist and holding it high over their great horned helm in a signal of defiance to the heavens, “it’s time for these pitiful upstarts to learn their place.”

WHAT HAPPENED: Platini totally submitted a proposal that was all, like, going to give four places in the Champions League group phase to, like, just these domestic cup winners who were not even CLOSE to sitting at the popular table in the domestic leagues, and the G-14 were like, wretch! I am FULLY not going to touch that. Plus, he was seriously saying that six spots should go to champions from like, these nothing leagues from I don’t know, Belarus or something. Would you even?

WHAT HAPPENED THEN: All hell broke loose. In a bureaucratic way, I mean. The clubs asked for more time to think about it.

THE CALLING OF THE BLUFF

WHEN: The fateful afternoon of just about a week ago.

WHAT HAPPENED: No one knows how it came about, but I like to think Peter Wood-Hogg or whatever his name is was sitting in his enormous oak-paneled study at Hogg Hall wearing his Arsenal slippers and nipping at a sherry and bitters when it suddenly occurred to him that the champions of Iceland were a team called Fimleikafélag Hafnarfjarðar. Why, he asked himself, surveying his acres of leather-bound books and chairs made of gold-studded stag, why should Arsenal be a d____d dormouse and drop out of the d____d Champions League so that a team called Fimleikafélag Hafnarfjarðar, a team whose name sounds like a cat being run over by my third wife’s BMW, can have a place? A red telephone was dialed, awful pleasantries about each other’s wives were exchanged in many languages, and the G-14 announced that it was threatening to split off from the Champions League and form its own massive big-club tournament unless Platini scrapped his reforms. UEFA wants to see Red Star Belgrade play Fimleikafélag Hafnarfjarðar? the G-14 asked. Well, let the fools have their tar-tar sauce. The Bayern Munichs and the television cameras will be over here, near the bikini models and the snow-capped mountains of cash.

WHO IS THIS CHELSEA? HAVE I SEEN HER ON THE REGISTER AT THE CLUB? No, dear, she isn’t quite…you know. She’s new money. Ghastly parvenu, frankly. She keeps angling for an invitation, but I’m not sure she’s G-14 material, don’t you know. Not much of a pedigree. Owner’s as rich as a snake but he’s got the face of a bemused leprechaun. Cross the street if you see her, love, or you’ll have to have her to dinner, and frankly I don’t think she’s up to snuff as a role model for the twins. 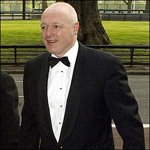 WHY ARE YOU WRITING ABOUT CHELSEA LIKE IT’S SOME SORT OF MAKEWEIGHT IN AN E.M. FORSTER NOVEL? Chelsea were in that group of 40-odd clubs who were being considered for G-14 membership, but after years of trying to get in and being looked down on by the European old guard the Blues had a lot of stored resentment. They probably weren’t alone. Faced with the obviously unpalatable prospect of losing UEFA‘s biggest cash cow, Platini had no alternative but to surrender his plan to throw the Champions League open to the winner of the Community Shield. But shrewdly, he began to undermine the G-14 by offering long-spurned non-G-14 clubs greater influence within UEFA, creating a special forum where they could assemble and drone on endlessly. Amazingly, the idea appealed to Peter Kenyon and he revealed that Chelsea were prepared to reject any invitation to join the G-14, a move which somehow put the future of the organization in serious doubt.

I plagiarized those last nine words from the Telegraph.

WHERE ARE WE NOW?

In a desperate state of needing to wrap this up before dinner, personally; and globally, in a kind of amorphous confusion and disarray. The G-14, reeling from the Chelsea blow like Ivan Karamazov after he discovered that he himself was the author of his own worst nightmare, have canceled their annual meeting and started talking just a little too fast about how their future is so bright that they may have to disband completely. You get the sense that they’re retreating to the fireplace room of the chateau for a cup of hot buttered rum and a halfhearted game of charades. In the meantime, UEFA have found a space on their website where they can announce to all the world that they are DEFINITELY NOT holding a secret meeting with the G-14 tomorrow.

It will be fascinating not to learn what they don’t decide to do there.

WHAT SHOULD THEY DO?

Different people think different things. David J. Warner thinks European football should emulate the NFL, or possibly NCAA basketball. Martin Samuel thinks the small teams should be kept out in the interest of strong competition. Thomas Dunmore, in a wildly sensible post, suggests that the choices are all so governed by political gamesmanship that “should” barely enters into it. What do I think? I think Dunmore is right that the G-14 are not nearly as weakened by these developments as the papers have led us to believe. I think Warner is wrong that an NCAA-style tournament would lead to lots of exciting upsets (since upsets in football are so often the result of smaller clubs playing extremely negative tactics and stifling the flow of the game, unlike in the NCAA where they result from smaller teams playing mad, inspired basketball and making the page count of Clarissa in threes). But I think he’s right that the Champions League would be more exciting if it were played from start to finish in a knockout format. I think that until the legions of administrators and bureaucrats and accountants are able to look at reform as an opportunity to improve the game for the fans, rather than as a dysfunctional reality-show version of “A Diamond as Big as the Ritz”, they ought to be locked in a closet and fed bread slices under the door. I think they deserve each other.

UEFA v. The G-14: The Short History of a Pointless Disagreement