Here’s an idea about football and rhythm: every match is a metronome. I mean every match has its own beat, every match goes in its own tempo, as players working with or against each other start to read each others’ movements and fall into the same pattern in time. The crowd at a match can feel it; you can move your head to it at home in your living room. Football can come closer than anything to the feeling of seeing music, and it gives us, like a song, a steady, moving measure by which a group of people can share a common experience of time.

But one of the most thrilling moments in the game comes when a great player touches the ball and suddenly, the rhythm changes. The beat stumbles or skitters, in a way that seems to tell you that something is going to happen. The best players seem to play in a different tempo than the tempo of the match—they attack the pauses, or they pause at the moment of attack. Watching Thierry Henry in his prime was like hearing a syncopated line work against a steady beat. Watching Johan Cruijff was like seeing a separate time signature.

I bring all this up because the best reason I can find for saying that Lionel Messi is the “next Maradona” (as everyone, sooner or later, seems to say) is that Messi and Maradona are the only two obviously great players I can think of who, when the ball comes to them, don’t seem to change the tempo of the match at all. There’s something so strong and so coherent about the way they both move that it’s as if you hear the same rhythm, only suddenly much more clearly. As if, the moment they touch the ball, the volume of the match goes up.

Look at the way they move their arms: in churning, scissoring circles, half wings and half wheels. Or their legs: so fast you can barely make out the steps, and yet with a discernible stutter, and yet with a determination that seems built to find straight lines. Seen against a black screen they’d look like choppy, bouncy runners, but seen in real life on the pitch they almost seem to slide.

No current player seems to move with less friction than Messi, or to move more directly to the goal, or to play with such plain intent. There’s something so beautifully unexpected about the way this works for him, the way he’ll slot the ball gently into the net just when it looks like he’s given himself up to the defense, that he scores the most surprising goals in football and the most inevitable goals in football at the same time. I don’t know whether he’s the best player in the world right now, but I know there’s no player with a game that feels as pure, and no young player with such a startling combination of realized greatness and still-untapped potential. Was there anything more astonishing in football last year than the way he recreated two of Maradona’s legendary goals, one of them, which Messi somehow replicated nearly note for note, arguably the greatest goal in the history of the sport? How many times did you watch it? Did you ever not get chills? 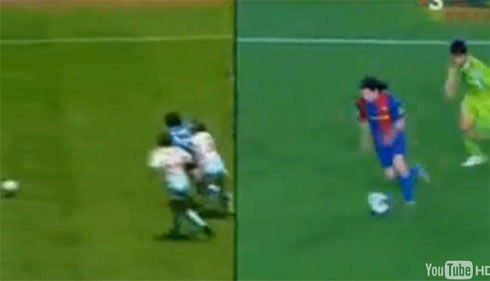 Lionel Messi is 20 years old. How could you not love this game?