The Late Last Word on the Match That Conquered Normandy 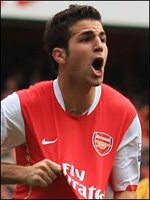 It happened, and amazingly, we survived: Manchester United played Arsenal, in a climate of hype that demonstrated how far the British media have come since the embarrassing cocoon of silence that surrounded the build-up to D-Day. (“So often the big battles disappoint, but with these two forces fighting at the absolute peak of their powers, this clash has all the makings of a truly classic encounter,” said a tiny sperm that would one day be Alan Hansen.) I wrote on Friday that the match would end in a surprising failure to bring about Armageddon, but frankly I was a little surprised to be right. What, not a single bolt of lightning? Arsène Wenger himself predicted that the spectacle would stop the world. As it was, it barely even slowed down Islington.

It was, unexpectedly, the match everyone seemed to expect: attacking, if not exactly played with a flair you could shine your shoes on; intense; and competitive to the end. I was right in my prediction that the decisive aspect of the game would be the midfield struggle between Cesc Fabregas and Anderson/Hargreaves, but wrong to think that, by winning this contest, Man Utd would go on to win 3-1. For long stretches United’s two midfielders swallowed Fabregas up like a peleton swallowing a would-be sprinting cyclist, but he broke free often and effectively enough to score one impressive goal and to keep the pressure on United’s defense. I was right to think that the Manchester side would play a mid-tempo 4-4-2 and build momentum from the back (although it frequently looked like a 4-3-3 with Ronaldo joining the attackers), but wrong to doubt the Arsenal defenders’ ability to handle it. They were poised and well-positioned throughout the match, and, had it not been for Gallas’s fairly fluky own goal, might well have done enough to secure an Arsenal win.

In the end it was a game that both teams seemed to win simply because neither of them ever really cracked. Portsmouth and Blackburn have been playing imposing football recently, and The New Chelsea look like they could tap-dance with Gregory Hines. But on current form it’s hard to imagine that these two teams won’t still be topping the table when they play again in April. At which point planes of hype will fill the air over England, and flaming bombs of hype will come tumbling down from the sky.

The Late Last Word on the Match That Conquered Normandy