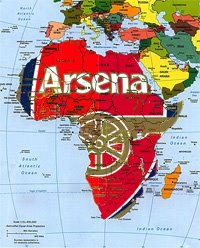 Arsenal, Manchester United, Chelsea and Liverpool are the most popular teams in Africa, at least according to the latest issue of the Economist, which also contains the rather striking information that Africa has outpaced Asia to become the Premier League’s largest fan base. The anonymous writer of this suspiciously cocktail-napkin-sized piece has no time to give sources for his statistics, nor to explain how it qualifies as “neo-imperialism” to give players from all over the world an equal chance to make millions of pounds playing in the world’s most popular league. (Yes, the question of the consolidation of footballing talent in Europe is a complicated one. Which is why it’s maybe not the best idea to start throwing around incendiary words like “imperialism”. Because how would discriminating against players from outside the home nation be less imperialistic?) It’s interesting, still:

Africans tend to support either Arsenal, Chelsea, Liverpool or Manchester United. Arsenal is probably Africa’s most popular club, Man Utd dominates in southern Africa, Chelsea is gaining ground in west Africa, while Liverpool is the team most Googled.

Poor Liverpool—so many Google searches, so few actual fans. I don’t know whether to feel glad that the league is thriving around the world, or sorry that the big four are carving up the loyalties of Africans the way they have those of 12-year-old boys everywhere else.