Around the World Cup 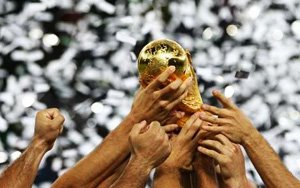 On a slow news day in football (and they’re almost all slow news days, unless you like transfer gossip and hearing that Y has backed Z) nothing beguiles the hours like imagining the next World Cup, when a new generation of players will come together to prove their greatness by savagely headbutting one another. Most of the time we can only dream, but every once in a while a flurry of semi-meaningful news stories comes along to help put our dreams into focus. Especially if we’re dreaming about infrastructure problems, transportation crises, crumbling facilities, and violent crime. All issues England will surely have time to address before the summer of 2018.

1. Rotation. FIFA have put an end to their short-lived rotation policy, whereby each continent had a chance to host the World Cup in turn. A giddy Europe looks forward to the possibility of never having to watch a match at three in the morning again.

2. England. The end of the rotation policy has opened the way for England to bid for the 2018 World Cup. Everyone seems to want them to get it, though they’ll have some competition from Australia. Around Anfield, Liverpool supporters raise a glass and tell the rest of the world that they’re looking forward to meeting them.

3. Brazil. The final country to host the Cup under the old rotation policy will be Brazil, which triumphed in a heated competition that it was the only nation to enter. According to Brian Homewood in the Reuter’s Soccer Blog, Brazilians are excited to see the 2014 Cup in their backyards but are worried about corruption and expense. Others are worried about transportation and the fact that not a single stadium in the country is up to FIFA standards. The murder rate in Brazil is 50 times what it is in England. But FIFA are certain that every stadium will have a full suite of television capabilities by the time the tournament kicks off.

4. South Africa. Speaking of murder rates, recent reports from South Africa—the second-to-last nation to get the World Cup under the old rotation policy—suggest that while there may be a tiny problem with violent crime (okay, they have the second-highest rates of murder and rape in the world), organizers have hit upon a promising new strategy of fervently wishing it away. Meanwhile, as Franz Beckenbauer warned last year, construction is still behind schedule and efforts to turn things around have been beset with internal strife.

It seems pretty likely that the crime problems everyone’s so worried about will come to nothing—it’s easy enough to put guards with machine guns on street corners, though whether this makes anyone feel safe is another question—and I’m sure that, one way or another, there will be stadiums for the games in both South Africa and Brazil. But I still think it’s to the good that the rotation policy is gone. I understand the desire to bring the World Cup to every corner of the world; the game belongs to everyone, can’t be a monopoly of former colonial powers, etc. But at the moment it seems impossible to accomplish this goal without a sort of fake, paternalistic “progressivism” whereby rich and powerful countries make a theatrical display of giving the Cup to their poorer counterparts, then alternately hold their hands and chide them while they make the quixotic effort to bring a supermodern sports infrastructure to an underdeveloped economy. Afterward, of course, we patronizingly tell them what a good job they’ve done and continue not caring how many of their citizens are hungry.

I hope that it will eventually be possible to hold a World Cup outside the current industrial world without this sort of degrading theatricality. But for now, I think everyone will be better off without it.

Around the World Cup